Zoocha want to be the best at what we do, so to demonstrate this dedication to improving our skills and expertise, we have recently begun a program of assessment and accreditation, obtaining certifications and awards across the team. Not only does this ensure that we are better able to prove our technical capabilities to prospective clients and partners, it gives our team members the opportunity for further professional development.

This is in addition to the ISO27001:2013 & ISO9001:2015 certifications that we have recently achieved for our development, support and hosting services, our AWS certification for Solutions Architecture, along with some of the less technical certifications achieved last year which included Scrum Alliance, NN/g UX amongst other things.

The Acquia Drupal Certification is pretty much the only recognised Drupal certification available for professional Drupal developers, and is certainly the most popular with many thousands of developers already having achieved certification worldwide.

The certification itself is targeted towards specific Drupal versions; namely Drupal 7 and Drupal 8. Within each of these versions there are several types of exams that are available to sit:

How these certifications fit together is perhaps better described by the following diagram published by Acquia:

In the last few months Joe and Reece have achieved “Drupal Grand Master” status in Drupal 7 by passing the 3 required exams, and just to outdo Reece, Joe also passed the 3 exams required for Drupal 8 certification to become a Grand Master in that also. In accomplishing this, Joe becomes the first developer in the UK to achieve this double Drupal 7 and Drupal 8 Grand Master certification status which is no mean feat.

Joe becomes the first developer in the UK to achieve this double Drupal 7 and Drupal 8 Grand Master certification status.

Other team members have also done exceptionally well in passing the Acquia certification exams at the various site builder, developer and specialist levels. Several team members also have further specialist level exams scheduled in for later this month with the aim joining Reece and Joe in the Grand Master club.

Acquia provide a global public certification registry that can be queried to ascertain the level in which a Drupal developer is certified to, or indeed what certifications an agency has across its development team. Zoocha is featuring pretty well on the registry so far: 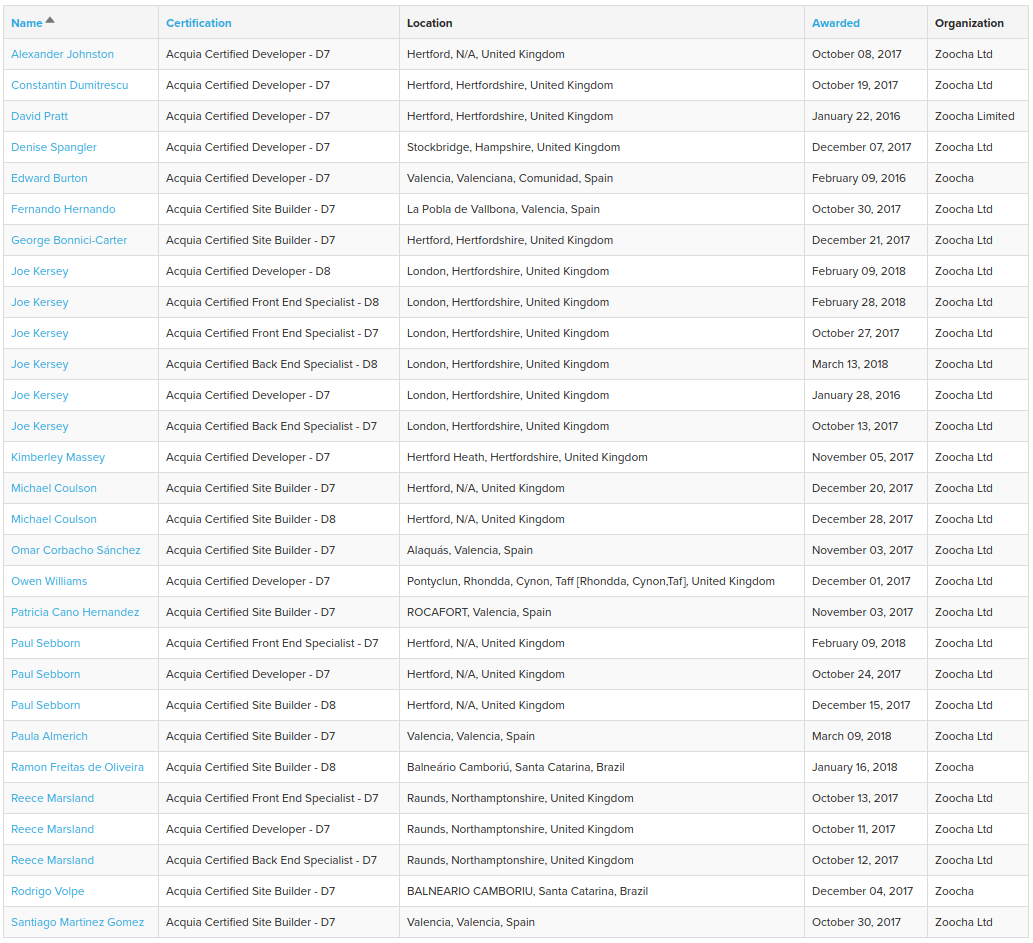 Why not check out our Drupal development services, Drupal support services or our Drupal consultancy services to see how our Drupal certified developers can help you and your organisation.